This Week In Raiding: Steady On

"Healthy discontent is the prelude to progress." - Mohandas Gandhi

Being at the forefront of any raid groups advancement - charging blindly into the unknown, so to speak - is by its very nature going to be fraught with setbacks and disappointments. Wipes happen, stress builds up and nerves get frayed regardless of whether the group is a world class progression guild or a more casual one. It's called progression because you're moving forward into new and dangerous territory and success is by no means assured.

This week our progression results were a mixed bag of uplifting positives counter-balanced by maddeningly incomprehensible setbacks.

Mountain Top has made some steady, if unspectacular headway in Firelands to this point, but we're moving slower that some people feel we should be, and nerves are getting frayed. It's less the pace of getting bosses down - 3/7 with only two nights of raiding per week isn't bad at all - but I think that it has more to do with how long it seems to take us to figure out the mechanics of each new fight. It seems as if our attempts at a new boss get only so far and just stall out. 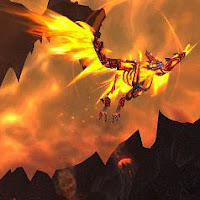 This week we pulled Alysrazor (pronounced a-LISS-rah-zor. Get it right) for the first time, and she schooled us on the true meaning of the word futile. Then she went on to further instruct us on all its synonyms: The words abortive, ineffectual, fruitless and unsuccessful all come to mind to describe our night.

We spent the whole of Thursdays raid working on Ragnaros's pet Firechicken to no effect, and by the end tempers were starting to run a bit thin. The tanks were getting frustrated with their mechanics and wanted to call it, the healers were frustrated with being unable to work out how to split themselves up properly and wanted to keep working on it, whilst the DPS were arguing about who, if anyone, should grab feathers and fly.

I always can tell when morale is sinking when the cupcake jokes stop. In the end we called the raid early and agreed to come at it fresh next week in the hopes that a little distance and perspective will help.


"If you're walking down the right path and you're willing to keep walking, eventually you'll make progress." - Barack Obama

Once a progression fight clicks, on the other hand, we don't regress. I wrote a few weeks ago of our struggles with Shannox the Rat-bastard and how we seemingly just couldn't get him down. Well, since then we've killed him with ease in one or two attempts each time we've faced him. It feels like all at once, as a unit, the fight just clicked, and suddenly it was as easy as selling beer at a Dwarven bacon-eating festival.

Beth'tilac has also been handled cleanly since we got her down for the first time. My only complaint with her is that she always drops Holy Paladin gear that our other Holy Paladin always gets. Spider Matron favouritism is the worst kind. And I like her shield, too.

We got our third Firelands boss down this week as well, with Baleroc meeting his end for the first time and marking our first three-kill night for this tier. We pulled him for the first time the previous week, and like Alysrazor this week, he gave us fits while we learned the fight.

If you are unfamiliar with the fight, Baleroc is an encounter where healer coordination is vital. The healers are attempting to keep up with ever increasing tank heal pools and incoming damage. This is done by healing people affected by Torment and gaining stacks of Vital Spark, which turns into the buff Vital Flame which boosts a heal cast on the tank by 5% per stack. It's crucial that all the healers get as many stacks as possible, and so it's incredibly important to know who is healing what and when.

It took us almost two whole nights of working on Baleroc until we got him figured out (which from the perspective of a week later, isn't bad at all, really).

In the end, what really made the difference is having a dedicated Healer channel in Mumble so that would could coordinate our rotation without the DPS and Tanks talking over us. It helped immensely, and within two pulls of changing channels Baleroc fell over dead and we were standing on his crotch taking a screenshot.

AND FINALLY: THE POINT

Mountain Top's progression through Firelands has been slower than other guilds out there, to be sure, but it's been steady. Each raid night brings us closer to figuring out whichever boss we happen to be working on, and there is a great feeling on confidence in the team, even though frustration got the better of us on Alysrazor last week. We're all working hard and waiting for that wonderful click.

Despite our rather casual schedule and the setbacks that we've had, our raid team is coming together really nicely. Certainly one bad night isn't going to stop us. There is a great feeling of inevitability that it's only a matter of time before we're taking a screenshot while standing in Ragnaros's crotch - if he had legs.