Over the next few weeks and months I am going to go on the Great Azeroth Photo Tour. I'm going to visit each zone in the game (in Alphabetical order) and create images of the most beautiful sights and places in each of the zones. I may, if I feel like it, add commentary on the zones or images as well. My hope is that I can get the entirety of Blizzard's magnificent fantasy world completed before Mists of Pandaria is released. I will be updating the Photo Tour on Tuesdays, Thursdays and Sundays.

Stepping over the magnificent Thandol Span and in to the Arathi Highlands for the first time one is struck by an overwhelming sense of emptiness. Gently rolling hills covered in grasses and thistle with bare rock jutting through the turf; you can almost feel the wind rushing through the zone unmolested by any trees to block its path. It's a zone that feels hushed and solitary. 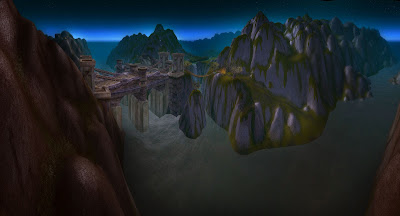 There is very little in the way of civilization here. One lone Horde town that hasn't changed much from the prison that it originally was, a couple of camps and farm houses, and the ancient, crumbling ruins of a once-great city that is now in the process of tearing itself apart from the inside-out as three different factions vie for control of it.

The most remarkable thing about the Highlands is the mysterious circles of standing stones scattered about, seemingly at random: Huge monoliths impossibly stacked and arranged for purposes that are their own, and surrounded by vicious elementals that make discovering their true meaning hazardous.

The Arathi Highlands is a zone that time forgot. Not just for the lonesome and abandoned feel of it, but also because it is one of the few zones that did not get revamped after the Cataclysm. If you visit, keep your voice down; loud noises feel distinctly out of place in the lonesome and desolate highlands. 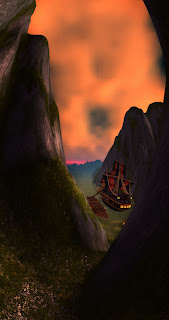