Call to Arms, A Rebuttal

Blizzard announced yesterday a new tweak to the Looking for Dungeon system to help alleviate the long dungeon queue times that are experienced by many.

The idea is simple enough: Incentivise the least represented role to encourage players of that role to queue up for dungeons more often by offering perks and a chance for rare in-game items.


"Call to Arms is meant to lower wait times by offering additional rewards for queuing as the currently least represented role. To be eligible for the additional rewards you must solo queue for a random level-85 Heroic in the role that is currently being Called to Arms, and complete the dungeon by killing the final boss. Every time you hit these requirements (there is no daily limit) you'll receive a goodie bag that will contain some gold, a chance at a rare gem, a chance at a flask/elixir (determined by spec), a good chance of receiving a non-combat pet (including cross faction pets), and a very rare chance at receiving a mount. The pets offered come from a wide variety of sources, and include companions like the Razzashi Hatchling, Cockatiel, and Tiny Sporebat, but the mounts are those specifically only available through dungeons (not raids), like the Reins of the Raven Lord from Sethekk Halls, Swift White Hawkstrider from Magister's Terrace, and Deathcharger's Reins from Stratholme." 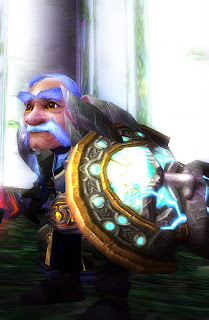 This is aimed primarily at Tanks, since 99% of the time they are the least represented role and the queue time bottleneck, but occasionally healers will benefit from this as well.  The benefit to Damage Dealing players is, if this system works as intended, drastically reduced queue times and a better, less frustrating experience with the Dungeon Finder.

I'm not going to go into the details of this new idea as I think it's been covered really well by others. Psynister has a great post up that dissects the advantages and potential problems with this new system extremely well, and from a DPSers perspective.

However, I do want to offer my own opinion on some of the issues that have been raised.

First off, this is a great first step into alleviating the Dungeon Queue problem, but it's not a long-term solution. If the fundamental problem with the LFD system is the lack of tanks, then the solution must be to encourage people to roll and play tanks. Having this added perk is nice, but it does nothing to change how the role plays or to encourage more people to do it.

Secondly, since the Damage Dealers are the ones suffering for the long delays, it makes sense to reward them as well. I suggest a scaling buff tied to the Queue time so that for each 15 minutes spent waiting in the queue, that person would receive a 5% buff to all rewards generated up to a maximum of 20%. Experience, gold and Justice/Valor points received would all be boosted.  Perhaps anyone with the maximum 20% buff would also get a chance at the rare drops that are now being dangled in front of the tanks. Adding this incentive would hopefully increase the patience of DPSers because they would be acknowledged and rewarded for enduring a wait time longer than the other roles.

Of course, doing this means that the only role getting screwed over would be the healers.  C'est la vie.

Lastly, one of the largest concerns that I've heard, especially from healers, is that this change is going to encourage more Plate DPS to try their hand at Tanking in gear that is unsuitable for the role, which means we are about to be innundated with a whole wave of LOLTanks in DPS gear that are completely unprepared for what actually needs to be done as a tank, but will get the extra rewards as the rest of the group stuggles to carry him through the dungeon.

This is certainly a possibility, and I'm sure there will be instances of it, but I don't think it will be any worse that it is now - DPSers are already queuing as Tanks for the instant queue.  Preventing that is what the Votekick function is for.


ENCOURAGING THE BADS, BUT ALSO SOME GOODERS

However, what if this change encourages a Death Knight or a Paladin DPS to try tanking for the first time and he likes it?  That's Blizzard's hope and the only way that the Queue situation can be improved long term.

It has never been easier than it is now to try a role that you've never done before. With Dual Specs being so cheap as to be inconsequential, and between the Auction House, Justice and Valor points and quest rewards and dungeon drops it's possible now to gear up for a different role without ever having to run a dungeon as that spec.  This is a mixed blessing, obviously, since at some point our fledgling Tank is going to have to bite the bullet, enter the queue and actually tank a dungeon. But there is no excuse for ever tanking without the proper tools and gear.


THE PRESSURE ON A NEW TANK

I have done some tanking in my time. I have a level 80 warrior that went through the Lich King expansion as Protection - even tanking some raids. I enjoy tanking, but the pressure that is put on a tank, particularly a new one, is pretty extreme. A new tank is expected to know which mobs need to die first, where to position them and when to interrupt them. They are expected to know where to go and what to do.

A new tank, especially one that is just dipping his foot into the role as a secondary spec, isn't necessarily going to have all the tools that he needs for the job. He's not going to be as quick to pick up stray adds; he may not even have a threat meter installed or know that he should, for that matter. He's likely going to make mistakes that will wipe the group.

And odds are he's going to get told off, insulted, belittled, called a bad, kicked from the group or simply ignored as a "noob".  It's happened to me before, and is frustrating as hell. Simply put, learning how to tank is not fun.

There is only one sure-fire, long term solution to the tank shortage: Tanking needs to be more fun. Blizzard can do their part, but certainly some of the reason that many tanks will only run with a guild group, or have given up Tanking altogether is because of how Tanks are treated by the other players.

It's up to us to solve the long-term Tank shortage by making life just a little bit more pleasant for them. Offer to help or coach a new tank that looks like he's struggling. Offer up a "Great tanking" kudo more often. Pay attention to the DPS order and CC targets. Or even do something simple like ask the tank what he wants from his raid markers, or offer to put them up for him - especially if the tank is a new one.

It's been a long time since I tanked - not since Wrath. But to prove that this change might just make things a little better after all, I am going to pick up my shield again and bash some heads with it.

I have three different characters that can start tanking right away:  Thosif, my Paladin is dual-specced Protection and I have been collecting gear for a while now (as of this moment he has a weird collection of tanking and DPSing gear, which means I'm going to have to spend some money to fill in the holes); Krupel, my Warrior who is level 80 and hasn't been into the Cataclysm zones yet; and my level 33 Paladin on Azuremyst, who is levelling as Protection but has yet to step into a dungeon.

If I, a dedicated Battle Medic, am tempted to give Tanking another try because of this, perhaps I'm not alone and this change will make a difference. Even if it doesn't, it's a step in the right direction. And if absolutely nothing else, it just proves that Blizzard does get it - they do understand what the players are going through and what the problems are, and that they're working on it - whether the community agrees with their choices or not.

To sum up:  Looking for Dungeon: Call to Arms is a good idea, but only time will tell if it's enough.
by Fannon at 4:37 PM