"The distinction between the past, present and future is only a stubbornly persistent illusion." - Albert Einstein

Perhaps one of the more lamentable facts of life when it comes to World of Warcraft raiding is that as each new tier of content comes out, the raids and dungeons of previous tiers tend to get quickly abandoned like an awkwardly phrased metaphor. This phenomena typically gets worse the older a raid is until the only time people will visit is to do the raiding equivalent of sightseeing. Now that's all fine and good if the purpose is simply to revisit a raid that has been completed previously for the sake of nostalgia, but what about someone going in to see a dungeon for the first time?


There are some magnificently complex and wonderful encounters in these old raids. The truly sad thing is that the typical sightseer will go in as an overlevelled and overgeared wrecking machine and rip through these old bosses with the same level of delicacy as it would take to open a Chunky Soup can with a stick of dynamite. Bosses die and encounters are completed with no regard to the very mechanics and elements that make the fights actually interesting. The end result is that the player smacks around some poor, lonely, underpowered bosses and gets the achievement for completing the raid, but doesn't actually experience or understand the raid on anything but the most superficial level. It's rather like going to Paris and never leaving the McDonalds in the airport; you get the stamp on your passport to say you've been there but can't really say much other than the hamburgers are awful.

Sadly, this essentially renders the Raid achievements and the titles that are associated with them meaningless.

Take my Shaman and Paladin as examples. My shaman wears the Starcaller title for defeating Algalon. She got it long after Ulduar was relevant, as an 85 in a full raid of level 85s. I defeated the encounter but really don't have an appreciation of what the fight is all about, nor does the title have any true emotional value; it just looks neat.

My Paladin, Thosif, on the other hand, typically wears his Kingslayer title with pride. I earned that title with my previous guild Shadowgarde through a lot of hard work and effort while the encounter was still the pinnacle of raiding (Halion just doesn't count and everybody knows it). The title and the achievement have meaning to me precisely because I feel that I earned them. The fact that a person can take a group of 85s and blitz their way through Icecrown Citadel in an hour and get the title makes it feel a little less special as well; I know I earned it, but others would probably just assume I got it the easy way.

Now, before anyone gets huffy and starts calling me an elitist, this is just how I feel about it personally. There are lots of reasons that people like going into old raids and dungeons at high levels, and I am certainly don't want to take anyone's fun away. But for me, the thrill of raiding comes from the challenge, and if I'm going to experience a raid for the first time, that's how I'd prefer to see it.

The obvious problem is that it's virtually impossible to get a group of people at the appropriate level in the appropriate gear together at the same time to run an old raid. Very few people will halt their levelling progress on a new alt long enough to gear him to run a raid, and even if someone did it's unlikely that they would be able to find enough other people who were doing that at the same time. It comes down to motivation: There simply is no incentive to do an older raid at the proper level. It's much simpler to either get a guildmate or two to run your alt through it, or wait until you're maximum level.

THE TEMPLATE: HERALD OF THE TITANS

There is, however, one singular achievement (technically a Feat of Strength) that a sightseeing raider can't get: Herald of the Titans. This little gem of an achievement requires a player to be the appropriate level as well as have the appropriate gear for the encounter. No overpowered tourists allowed.

This title is unique in that it is only available for a limited time while a character is level 80 and once you've passed that threshold you're out of luck on that character. If you want the title now, you're going to have to pause your XP, gear up your level 80 alt and find a group willing to go with you and kill the encounter the old fashioned way.

In essence, what this achievement does is make this single old raid encounter permanently relevant. 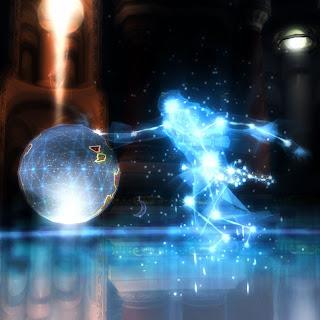 This achievement is not new—it's been around since Ulduar itself—but as we move into the new expansion I think it can give Blizzard a template for future raids. Why couldn't each new raid tier have a meta achievement with similar requirements to Herald of the Titans, each one with a unique and desirable vanity reward such as a mount or pet? The players that are running it while it's current would get it as a matter of course, but it could give people reasons to run the previous tier with their alts using the proper gear even after it is no longer the cutting edge. This would allow people to get the feeling of Burning Crusade and Vanilla raiding (of having to progress through each tier sequentially) if they want it, but would not actually require anyone to do it if they didn't feel like it.

And while we're on the subject, why couldn't Blizzard add similar achievements to older raids? Why not bring the Hand of Adal title back, but require that only a level 70 in a level 70 raid group could get it? How difficult would it be to reinstate the Immortal and Undying titles from Naxxramas with a character and item level restriction? What would be the effect of a Karazahn achievement that awards a miniature Wolfman or Strawman pet? Would there be a massive move towards creating level 70 raiding teams on Twitter to farm this beloved raid instance? If the rewards were unique enough, the hardcore would likely start frothing at the mouth to get alts to the proper level to get them.

Hell, a new Lady Vashj title might even make Kurn resubscribe for Mists.

Blizzard has made a big fuss about making sure that there is lots of things to do at maximum level, but adding a couple of these little achievements and rewards scattered through the beloved and excellent older content would give people things to do before max level that are equally important to do. Right now, the content is massively weighted towards the maximum level, and that is by design, but that also means that—by design—there is a massive amount of content that the vast majority of people will never get a chance to experience properly.

With the advent of Cross-Realm Raiding and soon Cross-Realm Zones there will potentially be lots of players who might be interested in halting their levelling progression on an alt in order to do some older raiding for their one shot at a unique reward. It may help remove the pressure to level as quickly as possible just so that there's something that they can do with their friends, and allow people to stop, smell the roses and actually experience the content that's out there in this big, virtual world of ours.

Email ThisBlogThis!Share to TwitterShare to FacebookShare to Pinterest
tags Alts, I ain't no expert but here's what I think, Little 'A' Achievement, Mists of Pandaria, philosophizing, Raids, rampant wild-eyed speculation, Sweet Memories