The Joy of Lowbies

"It strikes! one, two,
Three, four, five, six. Enough, enough, dear watch,
Thy pulse hath beat enough. Now sleep and rest;
Would thou could'st make the time to do so too;
I'll wind thee up no more." - Ben Jonson The Staple of News


As I mentioned in my last post, I don't have much in the way of free, unimpeded time to dedicate to WoW these days.

I'm sad to say that such an odd, irregular and easily interrupted schedule is not one that is conducive to raiding. Over the past couple of months or so my level 85s have withered due to neglect. My regular raiding has completely ground to a halt after going 8/8 on two toons with no heroic bosses down at all.

With only an hour or so of available time in an evening, running dungeons or LFR seem like an exhausting, implacable mountain to climb and not worth the effort. Doing daily quests gets very boring very quickly. Maximum level PVP is new and scary and intriguing, but would require a fair bit of effort to get the gear that would allow me to survive for more than the brief moment between when an enemy sees me and when he decides that I should be dead.

So what's a Dwarf to do?


THE JOY OF LOWBIES

I am an Altaholic, but not in the usual way. I am in a guild with several people who I would consider the norm for extreme cases of Altaholism: They tend to create an alt and focus intently on it until it reaches max level before giving a new one any real attention. Consequently, they have a lot of max level characters and characters that are well on their way there. 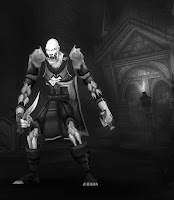 I am a little different. I have dozens of low level characters of every race and every class scattered around 10 or 12 different servers. Not including the Death Knights (only one of which I've ever gotten out of the starting zone; he's level 62), only a couple of these characters are above level 25. My highest level Horde character ever just dinged 18. Seriously.

I really enjoy low level characters and low level questing. There is something very compelling about boiling a class down to its very essence and seeing it naked and helpless in its infancy. In those initial levels each class is very similar: Uncomplicated, pure, and a joy to play. To see which skills are learned and when, and to discover how to use each new skill and see the way a class gradually becomes more complex is very intriguing.

I'm not really clear as to why, but I seem to hit a brick wall between level 14 and level 20. In the mid-teens the class will have taken shape and while many important and class defining abilities are yet to come, the fundamental structure of how the class is played is evident. For me, at least, this is when the experiment to test my attitude towards a class feels as if it's run its course. 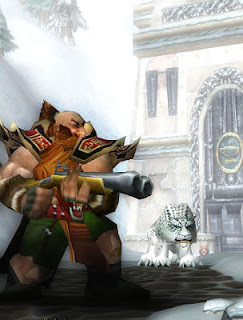 As well, it's at that point that a character is out of the starting zones and into the next areas (Barrens, Westfall, etc). These zones are larger and more involved than the starting zones and feel more general and less specific to the character. This is when my mindset changes from, "This is a fun toy to play with," to "Oh gawd, I have how many freakin' levels to go?!?". Taking a character through these zones begins to firmly cement the notion in my head that I'm committing to the grind to get the character up to max level; a long and daunting process, especially for someone who levels as slowly as I do. Therefore, any character that makes it past that barrier and hits 20 is one that—in my head, at least—has been selected to survive and make the slow journey to level cap.

I have really only levelled a couple of different characters past this breaking point. My first character, a hunter, got to level 48 before he was abandoned and left to rot as I switched servers. My Warrior, Priest and Paladin all got to max level in Wrath, and two of them have gone onto 85. Thallie, my Shaman and current raiding main (the cobwebs on her are, at least, fresh) was the first character I created when Cataclysm launched and is the only one that I have managed to take to max level since then. So many more have failed this litmus test and remain unlevelled and unloved. 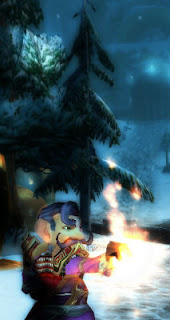 It seems that the decision to go past the level 20 barrier is a significant one for me. It is a mental commitment to that character; a commitment to learn and master the nuances of the class at the very highest levels. However, if the class, or the character's name or the server or anything else doesn't feel right, then that character is doomed to a shadowy half-life of neglect. Not to be deleted, but doomed to sit in the Inn at Sentinel Hill or at The Crossroads with pitiful white or grey gear, never to be the hero that they could be due to the capriciousness of my whimsy.

So having said all that, with a fervent desire to play but with limited play time in which to do it, I have been spending a lot of time with my low level Alts lately. Some have pushed past the elusive and mysterious Level 20 and have become, at least in my mind, actual characters, whilst some are still merely interesting toys to experiment with. It's been a lot of fun, and I've been indulging myself by seeing areas of the game and doing activities that I've never done before. It's as good a way as any to ride out the end of this expansion, at least until the raid healing bug bites me again.