On Flexibility, Emotional Attachment and Mister Spock. With Ice Cream!


"Thus, flexibility, as displayed by water, is a sign of life. Rigidity, its opposite, is an indicator of death." - Anthony Lawlor, A Home For The Soul

Those of you who follow this blog closely and spend just a little too much time obsessing over it (and you know who you are) may have noticed that there has been a distinct lack of Paladin related posts around here recently. In fact, looking back at my archives the last post that talked about Paladins specifically was way back in July.

There is a good reason for this: I'm not raiding with my Paladin any longer.

You know, I started this post with the best of intentions: A short, to-the-point post about what I've been up to in WoW and why I'm not posting about or playing my Paladin. Half-way through it turned into something completely different. I guess you and I will both find out what the hell I'm talking about when we get to the end because I have no idea where this is going any more than you do. Maybe there will be Ice Cream and Whisky. Goodness, that would be nice, wouldn't it?


SHAMAN: The new Battle Medic? At least this one's actually a Dwarf.

With Dragon Soul on the PTR, I was approached by our Guild Master who asked me a question that took me by surprise: Would I be willing to switch my raiding main in order to help with raid healing? It turns out that our guild is so full of main-spec Holy Paladins that it is a little bit like a large, overfilled doughnut—taking a bite of which will get Holy Paladin goop all over your shirt. And that shit is hard to get out. 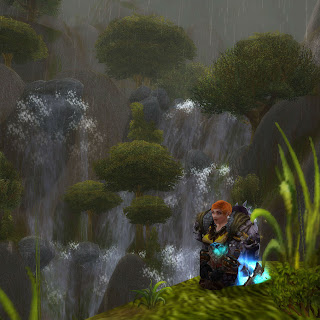 In the interests of trying to avoid a 10-man raid with three Holy Paladin healers—which would strain just about anybody's tolerance for egocentrics in a raid, I imagine—I switched my Raiding Main to my (then) newly 85 Restoration Shaman.

My GM's reasoning was pretty straightforward: Dragon Soul looked to be a very raid healing intensive series of fights and even with the strength of the 4.3 Holy Radiance changes it seemed as if our normal Paladin/Paladin/Priest setup wouldn't be ideal. This was made especially clear when we found that some of the fights would require only two healers, and neither Paladin had a DPS off-spec. My Shaman provided my GM with a different option.

So, the week before Dragon Soul opened I was running through Firelands, healing on my Shaman. I admit, it felt odd at first. Even though I had levelled her completely through dungeons I was woefully unprepared to take her on a raid. My understanding of the subtleties of the class were at a very basic level, my UI was not set up properly and her gear was, shall we say, eclectic; an odd mix of items cobbled together from every possible source and not powerful enough to even qualify her for the new Looking For Raid feature.

She's nicely geared now, although there are still some problem spots due to some very bad loot luck in Dragon Soul. I'm not sure why, but in our raids the only Tier Token that ever drops is Vanquisher tokens—we literally had a new Death Knight alt get his 4 piece in a single night, and the only reason he got each token was because all the other Vanquisher eligible players already had theirs. Meanwhile, I, along with a lot of other people in my raid group, are organizing strange voodoo rituals to influence the gods to drop something—anything that we can use. Now, I know that no one really cares about other people's loot problems, but that night made me want to roll a Druid just so I could actually get a drop.

THE SPOCK PRINCIPLE: The Needs of the Many, blah blah blah

Imagine, if you will, a dwarf lying on a brown leather couch, a worried expression showing through his beard and his armour poking holes in the leather and setting it smouldering because the shoulder piece is on fire, which for some inexplicable reason is perfectly normal. Next to him, seated at a comfortable armchair is a bald man with a white goatee neatly trimmed into a point and a notepad on his lap. He leans over towards the dwarf, and in a thick German accent asks, "Und how doez ziz make you feel?" 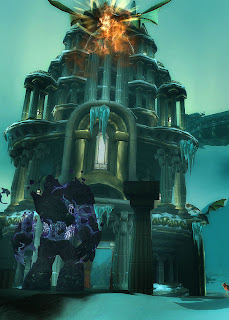 A long time ago I wrote an article entitled What Makes a Main?, in which it I talked about the emotional connection to a character as the fundamental element that determines which character would be a person's "Main Character". While that criteria certainly wouldn't apply to everyone (there are people who change their mains constantly due to many different factors, for instance), but it is absolutely true of me. My Holy Paladin is my main because I am emotionally invested in him, both in terms of character as well as the play-style and mythos of the Paladin. My Paladin just feels right.

So when Mylindara asked me to switch for the good of the raid, I felt a little conflicted. From a dispassionate point of view he made a lot of sense because even while temporarily undergeared, my Shaman brought something to the raid that we were lacking. Emotionally, however, my main is still my Paladin, and is the character that I am most interested in playing and progressing. Not only that, but I enjoy healing on the Paladin more than the Shaman.

So the real question that I, or anyone in a similar situation must ask themselves is: When does the needs of the group trump the desires of the individual? Should we always be selfless in order to help the group, or is it alright to say "No" so we can play the game the way we want to? Do the needs of the many outweigh the needs of the one when the ultimate goal of the game is individual entertainment? What would Spock do?


FLEXIBILITY: When is it okay to take one for the team?

I think the answer greatly depends on what type of player a person is. I believe that there are two extremes to this question where the answer is obvious and unchanging, and then there is a vast grey area in between where a large percentage of the player base sits.

The Activity-Centric people amongst us will look at this question as absurd because min-maxing every aspect of an encounter is fundamental to their play-style. Changing their character to bring that one extra buff or cooldown to the raid in order to gain any advantage—regardless of how small—is far more important than the attachment to a certain character or class. For them the emotional need is to progress at a personal level, and which character they do it on is only a secondary consideration; a tool used to achieve the desired end.

The other extreme is the Character-Centric people. These folks form an incredibly strong emotional attachment to their characters, and asking them to switch their Main Character—or even to change their character's hair-style—is like asking them to shoot a puppy. It'll break their heart and the aftermath will be very messy to clean up. Not to mention that I like puppies, and well, shooting them is just wrong. I mean, look at those eyes.

The vast majority of us, I think, fall somewhere in the middle. I have always considered myself more of the activity-centric type, but again, if I am to be truly honest with all of you, I tend to let myself get attached to my characters quite a bit and was a little bit annoyed when I was asked to not bring my preferred character to the main raids. There is a constant battle raging between the two sides when I'm making the decisions as to what to play.

In the end I made the change and the raid team is the better for it, I think. We have a good core of raiding healers now, with a lot more flexibility than we would have had otherwise. I may not be playing the character I would like, but the decision was right because the activity, in this case, was more important than my personal need to play the character.

And I suppose that's the fundamental answer to the question of when it's okay to make a personal sacrifice for the team, and the answer is a lot more simple than the length of this post would suggest. Simply put, if the goal is more important than which character accomplishes it, make the change and be happy about it.

Now, as I'm writing this I'm thinking to myself, "Damn, you've really outdone yourself in stating the blindingly obvious. Should we do a section talking about the different ways water is wet? Way to spend 1400 words talking drivel, dumbass".

It is a pretty straight-forward concept, but I think that everyone is going to approach it differently and everyone is going to have a different reaction to being asked to change the way they like to play the game. It all depends on the balance between the activity and the character within a person.

For me, the activity of seeing our raid progress smoothly won the day over my own desires to play the Paladin. So for now at least, the Battle Medic is a Shaman.

Have you ever been asked to play a class or role that you didn't prefer so your group could move forward? How would you react? What sort of balance to you have?


OH MY GAWD, WHAT WAS THE POINT OF THIS POST AGAIN?