It's no secret to anyone of the Holy Paladin persuasion that bracers were a huge problem in Tier 11. Only 4 sets of PVE Intellect Plate bracers were available when Cataclysm first launched: two heroic level 346 bracers, a set that dropped from Cho'gall and finally a heroic-only set that dropped from Sinestra. None of these were terribly common drops, and throughout the entirety of Tier 11 not a single one dropped for me.

Early on I had picked up the blue PVP bracers as a stop-gap. Even with the utterly useless Resilience, the Intellect upgrade was more than enough reason to choose them over the iLvl 333 Bracers of Umbral Mending that I was sporting since regular Grim Batol. They were not ideal, but I figured that they would do until something else dropped.

I wore them for six months.

And it's not like I didn't have opportunities to get them, either. I ran Grim Batol until my eyes were bleeding since the Dungeon Finder had a particularly evil habit of choosing no other dungeon for me. The bracers never dropped. Cho'gall didn't drop his either, but since I only ever got him down two or three times it's not nearly as surprising.

Fast-forward to Patch 4.1 and the Zandalari Troll instances and we see two new dungeons, dropping iLvl 353 gear that was designed to fill in the gaps between normal Heroic gear and normal-mode Raid gear. I was very excited when I learned that the Bracers of Hidden Purpose would be available in Zul'Aman; even more so when I learned that it would be off Akil'zon, the first boss in the instance. No more struggling with end bosses to get the nifty Plate Intellect bracers!

I figured I'd have them in a week. 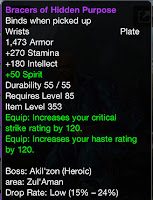 Sadly, the same, familiar story was repeated with these bracers, only with an twist. The Dungeon Finder, with it's cruel, anti-Holy-Paladin bias, would choose nothing but Zul'Gurub for me when I would queue up for a Random Zandalari dungeon. And the odd time that it did choose Zul'Aman I would invariably zone into a group who had already downed Akil'zon and thus not even have a chance to get them. In the whole time that Zul'Aman has been back as a 5-man dungeon I think I have seen and killed the Eagle Boss 3 or 4 times total.

It's enough to drive a Dwarf to drink. Not that we need much of an excuse, mind you.

Jump ahead again to 4.2 and a new guild: Taking my own advice, I was running a lot of guild groups into the Troll-roics and I finally managed to snag the ever so elusive purple wrist candy. I should have been excited as I enchanted them for our first raids into the Firelands, but I wasn't. I was fairly ambivalent, actually, because I knew that not 5 days later I would acquire enough Valor Points to simply go and buy the Bracers of Imperious Truths.

So after eight months of struggling to get decent bracers, within the span of a week I now have two. Admittedly, the new Valor Point bracers are vastly and unquestionably superior, but since they are Bind on Equip the temptation to sell them for a ridiculous amount of gold is extremely hard to resist. There are none of these on the Auction House on my realm, nor have any been listed to my knowledge. Can I live with these troll-rific bracers for another week or so to get a huge, potential payday right now?

I think I can, as long as the money is truly, epicly ridiculous.

So I put them up on the Auction House. I couldn't believe I was doing it even as I was clicking the Post Auction button. The thought of 50,000 gold makes a boy do silly things.

As a responsible raider, however, I set the Auction to time-out just before our raid starts tonight. If they don't sell - and at 50k gold I figure it's a low probability that they will - I'll enchant and reforge them and rock them in Shannox's face tonight.

And if they do sell, then I'll try use the money to craft some of the great gear that's available. I'm sure it won't last long, but the start of a Patch like this is a golden opportunity to cash in. It's not like these bracers will be hard to obtain, after all.

UPDATE: For better or for worse, the Bracers of Imperious Truths didn't sell for my rather ambitious asking price before our raid last night, so I equipped them for our fight against Shannox. The irony is, of course, that Shannox - should we ever kill the fucker - drops bracers too.