To Beta or Not to Beta


"It is my desire ... to do nothing which I cannot do with my whole heart. Having said this, I have said all." - Ralph Waldo Emerson


I'm sure this post will frustrate a lot of people who have been anxiously awaiting their Mists of Pandaria beta invite, if there is anyone left who doesn't have one. 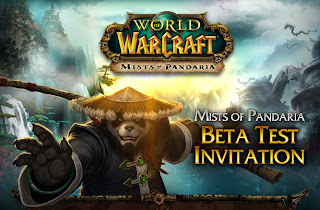 As a Annual Pass subscriber I knew that I was going to receive a Beta Invitation eventually as it is one of the perks of committing to keeping a WoW account active for a year. It ain't all about shiny horsies, after all. When it finally did arrive I was thrilled; I had never had a closed-beta invite to anything before so this was something new. I was always a little jealous of people who could claim that they started WoW in the beta, so this was my chance to get into something at the very beginning.

Of course, as a blogger, the beta of a new expansion provides a vast new range of subjects to talk about. There are a lot of changes coming that need to be discussed and opined on, not to mention entirely new and gorgeous vistas that are awaiting my virtual, gnomish-engineered camera. There are endless topics in the beta to write about because the beta itself changes constantly. No blogger in their right mind would pass up the such a rich source of writing material, would they?

Well, perhaps I'm not in my right mind, but after the initial excitement I've decided not to participate in the Beta.

Don't hate me if you don't have one yet, let me explain...


NO TIME FOR LOVE, DOCTOR JONES

With the great heaving chaos that is my life right now, any chance I get to play WoW is a rare and beautiful thing. It often comes in the few fleeting moments between when the Dwarfling is put to bed and the daily chores are done (which means cleaning up the swath of destruction that she leave in her wake) and when I go to bed. Sometimes it's an hour, sometimes less. And sometimes all I can manage is to stagger to the couch and pass out, leaving the great, menacing evil-doers of Azeroth unmolested for a night.

There are two great drawbacks to spending my very limited amount of playtime on a Beta server as opposed to the Live servers. One is that everything that is done in the Beta is transient because it will be reset to zero when the Beta ends and the expansion is launched. So any time and effort that I put into a Beta character is wasted and I think better spent progressing my characters on the Live Realms.

The other drawback has to do with the eternal frustration of crashes and inconvenient bugs. There is nothing more infuriating than having a glitch cost precious time when on a limited play schedule. I don't think I could handle the instability of the Beta. I think it would create far more tension than it would solve for me. And I get enough of that with the low level PVP that I've been indulging in lately.


THE TEXTURE OF ANTICIPATION AND EXPERIENCE

The other, less concrete reason has to do with spoilers. I'm the type of person who values the quality of the experience as much as the experience itself. How something is done is just as important as doing the thing itself. A Beta, with all the bugs and unfinished bits, is not a great way to see content for the first time if the texture of the experience is a primary concern. Seeing things perfectly polished in their final forms is what I'm after, and if that means waiting, then so be it.

However, the other side of this particular coin is that on launch day it is going to be virtually impossible to see things the way they should be seen. The giant crush of people descending on the new zones will make things chaotic and mucky, as has happened with every expansion so far. The Pandaren starting zone is going to be wall-to-wall bear butts competing for the same quest mobs and objectives, people will be griefing with their gigantic mounts on top of quest-givers and things are going to be in a general state of higgledy-piggledy. Not really the best way to experience brand new content either, is it?

Of course, when I see things like this I can't help but be tempted by the Beta.


From what I've seen so far I am incredibly impressed with the quality of the visuals of Mists of Pandaria. It looks simply amazing; the best work that Blizzard has done so far, I think. I would love to experience it first hand and create some stunning Images of Azeroth posts, but time simply is not on my side.