Scribblings of the Clueless Noob

"There are old heads in the world who cannot help me by their example or advice to live worthily and satisfactorily to myself; but I believe that it is in my power to elevate myself this very hour above the common level of my life." - Henry David Thoreau

Earlier this month I wrote a rather long essay on the feelings of burn-out that I've been dealing with lately in which I offered ten different things to do to combat them. For those of you with the fortitude to actually read through all 3300 words, I congratulate you; that post was a monster.

Like many people, I don't always follow my own advice. As I was writing that post and thinking about the different things I could do to clear my head and find a happy place with WoW again, I realized that at the time I wasn't really doing any of them. Oh sure, I was playing a different game and taking a bit of a break—which was what the post was all about, after all—but the other things I talked about were merely theoretical. So I figured that I should put a few of those ideas into practice and see what happened.


SCRIBBLING ON THE CAVE WALL

I'm not sure anyone has noticed but I have been on a bit of a posting renaissance lately. This post marks the fourth post in January, two more than I managed in the whole of October, and I still have two more posts that I would like to get done this month. It seems as if my brain has a WoW infection and has been using my fingers to vomit all over my blog. Gross.

I started out this year with the idea of getting Battle Medic back to where I'd like it to be by posting smaller posts more frequently. Ideally I'd like to get back to doing about ten to twelve posts per month, so the frequency is better but still not where I would like it. The length, on the other hand, I've failed utterly and completely. So far in 2012 (not including this post), I have written over 5700 words and seem completely incapable of keeping a post under 1000. I guess we'll see how this one turns out, although with the amount of things that seems to get added in as I go I'm not hopeful—I'm already at 400!


LOOK AT ME! I'M THE CLUELESS NOOB AT THE BOTTOM OF THE DPS CHART

Virtually every second of my WoW experience at maximum level has been spent healing. My first max-level character was a healing priest, the main that I ended Wrath with was my Holy Paladin and now, as Cataclysm draws to a close I've added a Resto Shaman to the mix as well. I love healing, and I have no plans to stop doing it any time soon, but in retrospect, my entire WoW career has been extraordinarily one-dimensional.

Oh sure, I've fooled around with other roles. I even managed to get my warrior tank into a couple of raids back in Wrath—an experiment that ended rather badly, I might add. Retribution, likewise, was used for levelling and then discarded upon reaching level 85. My Paladin has been unable to kill anything efficiently by himself ever since. I am the guy that always hears, "Oh, Fannon's on so we've got a healer" when he logs into Mumble. Simply put, healing has been the absolute focus of my attention for a long time now. And even as experienced as I am I still find it challenging and realized there is a lot for me to learn and improve upon.

However, doing the same thing for two years can get a bit monotonous. Imagine eating the same sandwich for lunch everyday for two years; I don't think you'd end up looking forward to the noon hour if that same damned ham on pumpernickel with yellow mustard was the only option. I think at least some of the reason that I was feeling burnt-out in the first place was because every time I was in a group setting I was doing the same thing that I always did.

And so I decided to do something completely different—for me, at least. I dusted off my badly geared, poorly understood Enhancement off-spec on my Shaman and took it for a spin in some dungeons and the raid finder. 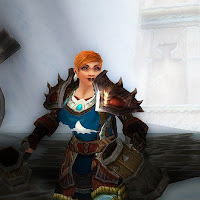 Oh my, what a different world. As a healer, I have the luxury to say away from the boss where it's relatively quiet and I can play undisturbed. Not possible in melee range. It's wonderfully chaotic; at times the sheer amount of spell effects that are going off completely obscure both the mob I'm hitting and my character.  It feels odd trusting the health of the party to someone else, and I get damned nervous when my health dips. But then I realize that I'm only DPS, so I'm expendable, which makes me giggle to myself and want to hit the boss even harder.

I suck at it though. Yes, I am that noob at the bottom of the DPS meters in that heroic you're doing. Yes, I am in your dungeon group wearing that gear, horrible as it is. You'd better believe that I'm the one standing in fire or accidentally pulling mobs or doing any one of a hundred things that would make me pull my hair out if I were healing me. Yup, that's me.

But I'm really enjoying whacking things with my giant beer steins. I'm enjoying the new challenge and the new responsibilities (or lack thereof) that come with dealing damage. It's given me something completely different to look forward to when I log into the game.

I'm still raiding as a healer, and it will always be my first, passionate love. But, if I can encourage infidelity to the game itself, why not cheat on my preferred role, too?

After all, unlike real life, in the gaming world, monogamy isn't good for the soul.

This post weighs in at 1029 words (not including the opening quote or this postscript). Close enough to call this one a win for brevity.