Worlds Collide, Then Have Brunch

For the first time my WoW life has intersected with my real life.
One of my favourite Paladin bloggers, Ophelie from Bossy Pally and the Giant Spoon is moving to Alberta to start her new career after graduating University in Newfoundland. On her way to go apartment hunting in her new town, she was planning a quick stopover in Edmonton, and I managed to convince her to meet up with me and spend a couple of days hanging out together.

Bossy Pally has always been one of my absolute favourite Paladin blogs, and Ophelie's mix of sharp, intelligent class commentarty and intimate, personality-filled writing were very influential in defining the style and topic choices that I would adopt for Battle Medic. Of course, I didn't tell her that in person because I didn't want to come off as a drooling fanboy, but it's true nonetheless.

We had a great time while she was here. Ophelie is an remarkably engaging and vibrant person who is incredibly easy to talk to. Surprisingly so, considering she is constantly describing herself as "Super Shy" and an "Insecure Nervewreck" on her blog. We had no difficulty maintaining great, interesting conversations the whole time she was here. I don't think I have ever met a person who maintains better eye contact while talking than she does, and she gets this intense, measuring squint to her eyes when she's listening to what you have to say. Suffice it to say that I think we hit it off pretty well - my dogs and the Dwarfling were certainly taken with her. 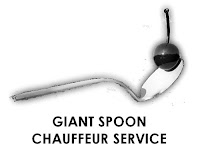 She arrived in Edmonton on Thursday morning and I picked her up at the airport. I had seen the photos of her that she had posted on her blog, but had never seen her in person before, nor did she have any idea what I looked like. So to make sure that she would know who was there to pick her up I made a Giant Spoon Chauffeur Service sign, which actually proved to be an effective ice-breaker.

THE BOSSY PALLY AND THE SILVER CLOUDS

After a nice brunch with my wife, the Dwarfling and a some friends of mine visiting from Saskatoon for the U2 concert, Ophelie and I headed to the Alberta Art Gallery to check out an exhibition on Andy Warhol. It was the only Canadian stop of this particular exhibit, so I'm glad we managed to catch it as it was filled with some amazing work. In particular, there was an installation called Silver Clouds; neutrally bouyant balloons that floated around a room that was very cool.

A rather odd moment happened as we were touring the gallery. It struck me as quite trippy that I was standing there with someone who I knew, but didn't know; a surreal blend of new and familiar. It was a odd moment of realization that my online world and real world were colliding in a way that I had never really experienced before. The fact was brought home rather humourously when I sent out a quick Tweet from my iPhone about it, and less than a minute later her cell phone buzzes with the notification of the Twitter Mention. We had a good laugh, and it sparked a great, half-hour long conversation in front of a psychedelic-pink silkscreened version of The Last Supper.

After the art gallery, we wandered the downtown core for a few hours and then went to Da-De-O, a cajun-style hole-in-the-wall diner that is a local institution. Their sweet potato fries and Po'boys are legendary in Edmonton.

TWO PALADINS AND A DRUID WALK INTO A BAR

There is a punchline there, somewhere...

Friday night saw Ophelie and I meet up with another Edmonton blogger, Corath. Who, despite living in the same city, I had not met up with before. We arranged to meet at The Bothy, a ultra-cool, upscale wine and whisky bar that I go to frequently because my best friend is the bartender there and gets me cheap drinks.

I admit, the meetup started out a little awkward. Once we got the table snafu sorted out and sat down there were a few rather uncomfortable moments of silence; all three of us looking in different directions and not talking. It took a couple of "So, WoW!"-type proddings to get the conversation moving, but once we broke the ice we had a great time talking about WoW, blogging, wine, cheese as well as a whole bunch of other topics.

Corath is an interesting guy, as it turns out. If you have never read his blog - straightforwardly named Corath's Blog - I highly recommend it. He is a diverse writer and blogs about a lot of widely varying topics. It turns out we have a lot in common. His biggest flaw: Dirty Hordie DPSer.

SHOOTING THE BOSSY PALLY
During our walk through the art gallery I told her about my previous career as a portrait photographer and I asked her, somewhat timidly, if she would be interested in letting me photograph her. It's been a while since I have had an opportunity to do a portrait for anyone outside my immediate family, so I jumped at the chance when Ophelie agreed. It was a lot of fun; Ophelie is a natural in front of the camera and we got some great images.

My god, did it feel good to get behind the camera and do a portrait session! It's been far too long since I've had a subject in front of me that wasn't directly related to me. I don't think I ever feel more alive than when I have a camera in my hand, a person in front of me and the freedom to create whatever I feel like. Why don't I do this more, seriously? 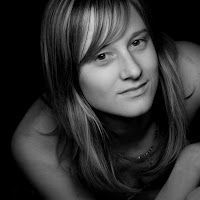 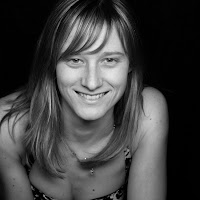 WORLDS COLLIDED, THEN HAD BRUNCH

I had a great time getting to know Corath and Ophelie. This was the first time I have met any of the people that I have been getting to know through WoW, Battle Medic and Twitter, and it was nice to have someone to talk about the game and blogging with in person.

The idea of turning a casual, internet acquaintance into an actual, real-world friend is a very cool prospect. Up until now my online life and the life that is spent with my wife and child have been very separate because my wife has absolutely no interest in the game, and I don't know anybody who plays. This was my first opportunity to show my wife that there are real, interesting people that can be connected with through this game, and not just a bunch of Internet Dragons to slay.
by Fannon at 10:24 PM